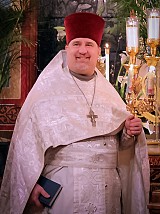 Fr. John Memorich is a native of Minneapolis, MN who grew up attending Protection of the Blessed Virgin Mary Cathedral (St. Mary’s). Born with club feet, his uncle, Archpriest John Dzubay, washed his tiny feet with Holy Water and told his parents, “Don’t worry, one day these feet will walk in the Altar.” Not only did this prophecy end up coming true, but Fr. John literally grew up in the altar learning about the Church and how to serve from such noted pastors as Frs. Karp Pateyuk, Vladimir Lecko, Nicholas Timpko, John Matusiak, among others. He attended St. Vladimir’s Seminary from 1982-87, married Jani Abraham (whom he met in high school) in April of 1987, and was ordained to the Holy Priesthood on June 11, 1989. Fr. John’s first pastorate was at Holy Trinity Orthodox Church in the tiny dairy farming community of Clayton, WI, which he served for seven years until being reassigned as rector of Holy Archangel Michael Church in June 1996. Fr. John and Jani have four children: John, Sofia, Nicholas, and Marina. Deacon Daniel Kovalak was born in Cleveland, Ohio and was baptized at Archangel Michael Orthodox Church. As a young man, he served as an altar server. He graduated from Parma High School, then attended the University of Akron where he received a BA in Education. He went on to receive a Masters Degree in Educational Leadership. He and his wife Matushka Catrina have four children: Daniel, Katya, Nikolai and Rebekka. In addition to serving at St. Michael's, Dn. Daniel and Mat. Catrina are also acting directors of St. Vladimir's Summer Camp. +Deacon Dennis & +Matushka Helen reposed in the Lord on November 10, 2018.  May their Memory be Eternal!

Schedule
News from the OCA
Bishop Daniel Enthroned as Twelfth Hierarch of Chicago and the Diocese of the...
6 hours ago
Metropolitan Tikhon Issues Letter on Inaugural “Church Musician Sunday”
2 Oct 2022 at 9:42am

His Beatitude Metropolitan Tikhon Calls for Prayer for Those Facing Hurricane...
28 Sep 2022 at 5:04pm

Check out our various clubs and organizations!